How To Bring Down The House 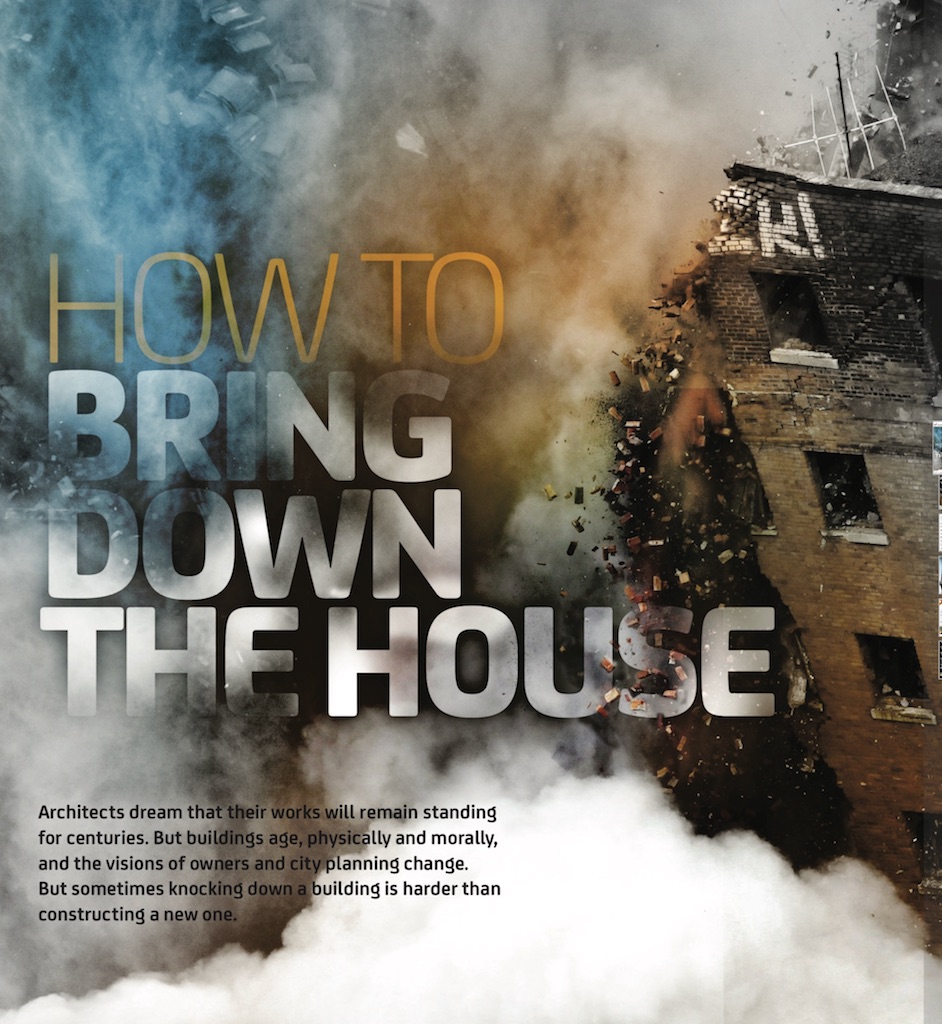 How to demolish a building

The tidiest method of building demolition is a MANUAL DISMANTLING. In addition to the traditional sledgehammers, chisels and crowbars passed on to us from our ancestors, this process also uses jackhammers and a variety of heavy-duty tools, such as pavement breakers, winches, and screw jacks, invented in the late 19th century. Workers “undress” the building step by step: they remove windows and doors, dismantle all appliances, pipes, and wires, and floor by floor take down and remove the walls and ceilings. A large part of the accumulated materials goes towards recycling: metal and glass are melted down, concrete and brick are ground into gravel. However, this tidiness has its downsides. The noise is terrible, made worse by the time it takes: no one will be thrilled to listen to jackhammers pounding away for months. More- over, such precise work does not come cheap.

is much cheaper. Cartoonists love to portray demolition in colorful pictures showing a building being taken down by a huge weight swung by an excavator. However, in reality this tool, called a wrecking ball, which can weigh up to five tons, is not used often. It was invented at the same time as the jackhammer, but reached the peak of its popularity in the 1950–1960s and lost it soon after. The reasons are uninteresting — the crane arm is short and cannot reach very high, and it’s impossible to begin from the ground floor due to safety reasons: it is not only card towers that can collapse. In addition, a lot of open space is necessary to use a wrecking ball. It is also impossible to use it to take down a building that is attached to other buildings, and modern means of demolition are quicker and more economical. Now wrecking balls are used only to demolish separately standing buildings with no more than two floors. Incidentally, wrecking balls are not only spherical or pear-shaped balls which are swung horizontally from side to side. There are also wedge-shaped weights that drop vertically and are used for destroying horizontal constructions: falling from a height, they can break ceilings and foundations.

Nowadays long reach excavators are used more often, equipped with modern tools: clamshell buckets, hydraulic hammers and scissors. A clamshell bucket is a big metal bucket with two or more shells, with which some parts of buildings are “bitten off.” The span of the “mouth” in one of the biggest excavators is 1.2 meters and weighs more than four tons, and the “bite” force is 145 tons — 40 times larger than that of the tyrannosaurus rex. With a clamshell bucket, an excavator can destroy a building up to 15 meters high, as well as buildings underground, such as semi-basements and underground car parks (where it is inconvenient to swing using a spherical wrecking ball). The advantage of this tool is that the bitten-off part can be immediately loaded into a car or set aside, avoiding leaving a pile of debris at the building site. This makes the loading and clearing process much quicker and more efficient. This is how five-storey panel buildings are demolished. However, there are some materials that are out of the clamshell bucket’s reach.

HYDRAULIC SCISSORS are used for hard re- inforced concrete and steel constructions. They are substantially bigger than ordinary office scissors and weigh several tons. Sometimes they resemble regular scissors, with two sharp blades separated by a gap of less than 1mm, and are used to cut

bridge coverings and steel beams. Sometimes they are more similar to enormous pliers and are used to break down brick and concrete walls. Hydraulic scissors can gradually “dismember” a building right down to its base. The arms of special long reach excavators, which weigh up to 200 tons, can be quite long, up to 67 m. It is enough to demolish most multi-storey buildings.

Not all buildings can be destroyed by the work of explosives technicians on the first try. There are many examples of unsuccessful demolitions. In October 2015 in Glasgow, Scotland, thousands of people watched the demolition of six 30-story skyscrapers which had been a symbol of the city for a long time and the highest residential buildings in Europe. After the simultaneous explosion, the towers caved in and collapsed into clouds of dust. But two of them were not fully destroyed and remained standing vertically. In 2014 the illegally constructed 16-storeys building in Sevastopol was successfully blown up only on the third try. And one of the most famous examples of explosives technicians’ failures was the demolition of the Cathedral of Christ the Saviour in Moscow in 1931: the hard walls, which could not be manually dismantled, remained standing after the powerful explosion. The explosives technicians had to repeat their task.

Whatever cannot be bitten off, cut, or destroyed can be smashed. H Y D R A U L I C HAMMERS are enormous versions of jackhammers, hanging from excavators. Different tools can be fixed to it, such as wedges, chisels, and picks, which can crush materials of any hardness with enormous energy and a rapid frequency of up to 40 strokes per second. Their hammering is familiar to most citizens: in a big city, there is always someplace where these “metallic woodpeckers” are pounding asphalt or the foundations or the remains of a building. However, their radius of destruction is lim- ited: they can reach a height of no more than 6 meters.

One of the most effective tools is the OXYGEN LANCE, used during the cutting and drilling of monolithic concrete and reinforced concrete constructions. It is a burning steel tube through which oxygen is passed. The working end is heated up to 1350–1400°? with the help of a welding arc or torch. After the metal has been ignited the outside heating source is taken away. The working end of the lance reaches 2000°? and the iron’s released combustion products can melt even concrete.

The latest in demolition equipment are radio-controlled DEMOLITION ROBOTS. In terms of structure, they resemble typical excavators, but they don’t have an operator cab and so they can be produced in any size, ranging

from gigantic to small enough to be able to run upstairs and enter through doors. They are more productive than the usual human-operated machines and are able to keep people fully safe.